CONCERT ON THE OCCASION OF THE 700TH ANNIVERSARY OF GRAČANICA MONASTERY 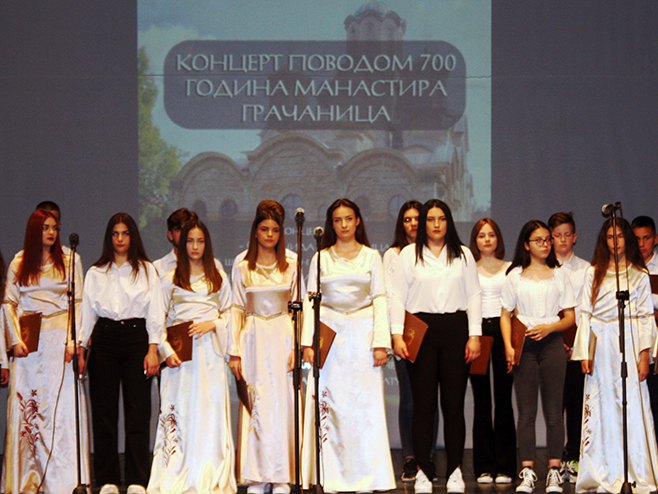 A solemn concert was held in the House of Culture in Gračanica on the occasion of the 700th anniversary of the Gračanica Monastery, the endowment of King Milutin.

Performers at the concert were students of Music Schools from Stanišor in the municipalities of Gjilan and Gračanica, the Simonida Choir from Gračanica and choir from Kosovska Mitrovica.

Deacon Bratislav Bogdanović told Srna that this jubilee of the monastery was one of the most important dates in the recent history of the Serbian Orthodox Church.

The hall in the House of Culture was full of visitors who had the opportunity to become acquainted with the history and significance of this Serbian shrine, which was built 700 years ago by King Milutin in addition to more than 40 other places of worship.

During the program, the audience was informed that many had sung and written about the beauty of the carved stone walls and the architectural appearance of Gračanica, including writing that the monastery was built of stone, surrounded by bricks, with high arches in perfect proportions.

This Serbian shrine, admired by every visitor, especially the faithful, is adorned by the upper dome construction through which ‘light shines to overpower the semi-darkness on the floors,’ which is precisely what makes it one of the most important religious buildings among Serbs, protected by UNESCO, along with the Patriarchate of Peć, Visoki Dečani and Our Lady of Ljeviš.

– The Gračanica Monastery, the endowment of the Holy King Milutin, was built in 1321, and fresco painting was completed in later years – said Deacon Bogdanović, the founder and leader of the Simonida Choir.

Musical talents performed Bach’s, Mozart’s, Khachaturian’s, Chopin’s compositions on piano, harmonica, guitar, flute and violin, which was met with the general enthusiasm of the audience.

At the end of the program, the Simonida Choir performing the song Lazarica, and Kosovska Mitrovica Choir the song Heroes from Košare made the audience stand up to their feet and shout ‘stay – we are staying here.’