DRAGIĆEVIĆ: LANGUAGE - MOST IMPORTANT PART OF IDENTITY OF SERBIAN PEOPLE 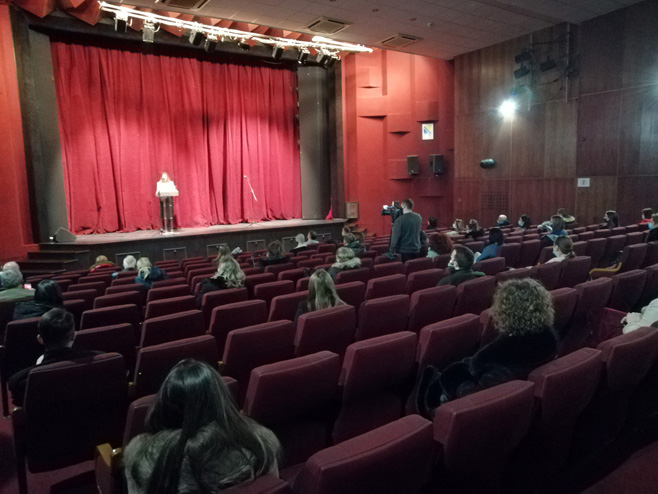 The lecture on Great Serbian Scientists on the Serbian Language, Science and Culture was held tonight at the House of Culture in Brčko, on the occasion of the International Mother Language Day.

The lecturer Rajna Dragićević, a professor at the Department of Serbian Language with South Slavic Languages at the Faculty of Philology in Belgrade, said she wanted to introduce the audience in Brčko to how prominent Serbian intellectuals living in the late 19th and early 20th centuries were thinking about Serbian culture, especially language.

Dragićević noted the enormous value of language and that it was the most important part of the identity of the Serbian people to whom she told that they could preserve their language better.

- When speaking about the language being endangered, what is meant is the influence of Anglicisms and foreign words. I would say that the bigger issue is the banalization of the language system, which is being applied more and more often - Dragićević told reporters.

She noted that the biggest problem was that linguistic stratification existed no more, and that all functional styles were reduced to conversations, as best demonstrated in the media.

The lecture was organized by the Serbian Educational and Cultural Association /SPKD/ Prosvjeta from Brčko.

The President of Prosvjeta, Dragan Tomić, said that the goal of the lecture was to draw attention of younger generations to the importance of preserving their language.

- We see a wide presence of foreign language schools, and many people do not know their language. That is why these lectures are welcome, as we can hear something new and valuable - Tomić pointed out.