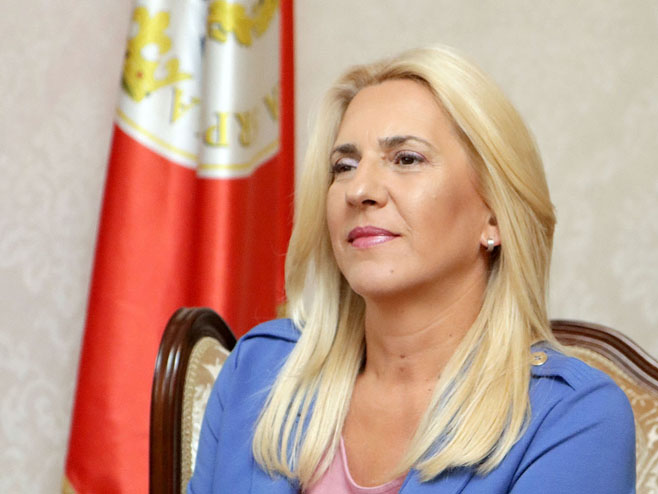 The President of the Republika Srpska, Zeljka Cvijanovic, stated that she was happy that the citizens of Srpska have support in Serbia, as well as because Serbia is looking forward to every success of Srpska, and said that we should draw strength from unity.

- Our aspirations and encouragement that we give to each other and the support that exists there, is something that is unquestionable and that represents a huge benefit for us in Republika Srpska - said Cvijanović last night on the occasion of the manifestation "Days of Srpska in Serbia", which this year takes place through TV shows.

She stated that she was very grateful to Serbia for showing the concrete dimension of that cooperation in recent years, and reminded that the Government of Serbia and the President of Serbia and other institutions significantly influenced the implementation of numerous important projects in Republika Srpska.

Cvijanović mentioned that it was done for Serbia to be present in every municipality of Republika Srpska, through important projects - construction of schools and kindergartens, reconstruction of health centers and other infrastructure and communal facilities.

- I'm really happy about that. But a story needs to be added about big strategic projects, such as highway construction. Definitely, the strategic project of the Republic of Srpska is to connect Banja Luka and Belgrade by a highway that will go through our territory. That means a lot, because it will give some new development chances to Republika Srpska - stated Cvijanović.

She pointed out that, in addition, the political understanding of Republika Srpska and Serbia is important.

- We are aware of common challenges. The fact is that we should use every opportunity in every possible way to be together, to show that we are together and to draw strength from that. I would say that the Republika Srpska also draws a lot of its strength from the stability that exists in Serbia - Cvijanović emphasized.

She pointed out that the beginning of the manifestation "Days of Srpska in Serbia" was a complete success during these years, because it contributes a lot to the closeness of Serbia and Srpska.

- In essence, it confirms our closeness more than it allows us to discover some new things. Although, again, it means from the aspect of economy and tourism, but also additionally, because it may be a way to get to know the potentials of Republika Srpska in more detail - what they can do, where to buy, how and where they can spend their time - said the president of Srpska.

According to her, this event also contributed to the regular activities of the two governments, which cooperate and promote what are common goals.

She mentioned that everyone from Srpska in Serbia feels like they are on their own, and that people from Serbia also feel that closeness when they come to Republika Srpska.

Cvijanović pointed out that this is a manifestation that should present the overall environment in which Republika Srpska and Serbia live, and that is love and harmony and understanding.

She pointed out that Republika Srpska has many potentials that can be promoted, starting with rivers, mountains, extreme sports, spas that provide a pleasant and good vacation, as well as certain health care.

- There are also our beautiful ethno-villages and hosts when it comes to rural tourism, and there are many things when it comes to religious tourism. All this together represents a solid tourist offer and it is a good story to promote ourselves in that way - said Cvijanović.

She mentioned that Srpska, through its representative offices around the world, strives to promote as much as possible what it is and what it can do.

- In many places, we have had the opportunity to advertise certain of our products and make close connections with the business community of those countries in which our representative offices operate - said Cvijanović.

She stated that the Representation of Srpska in Belgrade, which is the engine of many activities, plays a significant role in nurturing close ties between the Republika Srpska and Serbia.

The traditional manifestation "Days of Srpska in Serbia" started last night with the showing of the first of six collage TV shows that will deal with institutional, economic cooperation, as well as cooperation in science, information technologies, and higher education.